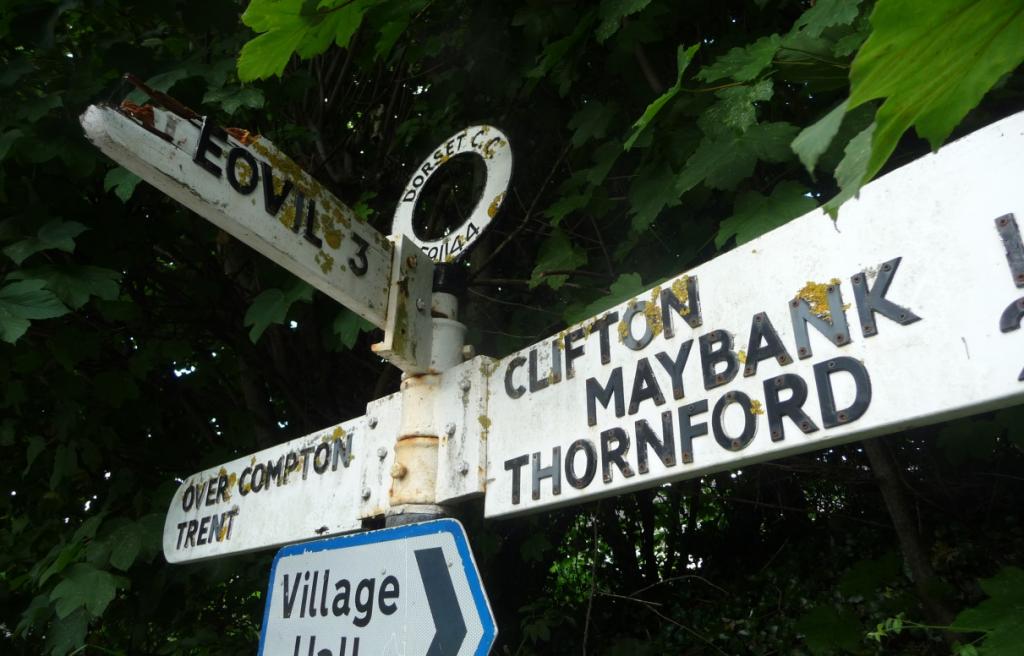 A PDF Version of this document is available for downloading.

After the August survey of fingerposts it was decided that this post was the most suitable for volunteers to start on.  It is of completely different and simpler construction to the Back Lane post.  There are three main types of Dorset finger posts, the other common variant being just over Smiths Bridge at the Clifton Maybank junction.

Following a meeting at the post with Bob Skett, Peter Clark and Jim Clegg, who had all previously responded to the Parish Council request in the Pennant for volunteers, it was decided that the best approach was to dismantle it for complete cleaning and repainting.

I had already removed the wooden fingers and Bob volunteered to remove the finial and finger brackets which he did with Jim’s help.  The lower bracket securing bolt sheared off during disassembly due to corrosion and the bracket itself was cracked to point that it broke off its collar during removal. The securing bolt was drilled out but the bracket collar was completely seized on the spindle due to corrosion.

I later tried shifting it by applying heat from a blowlamp with the help of Graham White who came out from ‘Highcroft’ to see what I was up to, but to no avail.  Graham and I then drilled the bolt through the collar and spindle and after much effort got it off.  Graham’s unsolicited help was very much appreciated and he spent all morning and a good part of the afternoon helping to remove the corroded parts, including supplying drill bits and the power for the drill.

The spindle was very badly corroded and it was decided to take it off for refurbishment/replacement.  It was found to be mounted in an alloy sleeve of about 7 inches length that was secured internally to the post by three countersunk socket head bolts. A cobalt drill bit had to be purchased to drill these out using a hefty mains powered drill. The sleeve would still not shift and it took another week of lubrication and use of a lump hammer and cold chisel before I got it out.

An attempt to refurbish the spindle by welding over the large rusted hole near the top was partly successful but other pin holes were discovered over much of its length and the remaining sleeve wall was thin in many places, so it was cut off just above the sleeve junction with the alloy flange and a new length of steel tube was welded onto it. 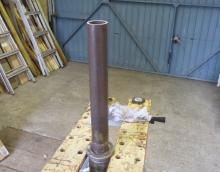 The sleeve was then drilled and tapped to take three M8 countersunk socket head bolts to replace the ones drilled out.  It was then painted with Hammerite white. 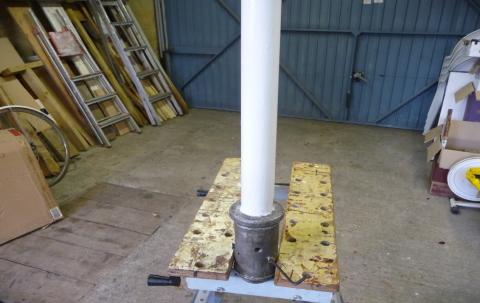 The welding to repair the bracket and sleeve were unexpected expenses and will account for approximately 45% of the cost of the total job.  I had several conversations with the Areas of Outstanding Natural Beauty (AONB) fingerpost technical expert over the post construction.  In their restoration work they usually remove the post, cut off the top 12 inches with an angle grinder and then cut the removed section vertically to release the sleeve.  This has the disadvantage of shortening the post; an option not available to us as ours is a short one anyway.  They were very interested in the approach we were taking and want to receive photos etc.

Bob Skett cleaned and repainted the finial and finger brackets, with multiple coats of Hammerite.  The finial was alloy so we had to purchase some special Hammerite primer for this.  Bob sourced some new numerals from eBay for the grid reference and will take no payment for these.

The YEOVIL finger had previously been replaced at some point with softwood one and was completely rotten.  I managed to restore the other two fingers and made a new one in oak bought from Yandles at Martock for the YEOVIL direction.  They are painted with multiple coats of Sadolin microporous matt paint of the type coincidently recommended by AONB.

All lettering was removed, the paint cleaned off and each letter repainted.  These are metal letters screwed to the finger, not plastic ones glued on as on some of the other posts, e.g. the Back Lane one done last year.  New screws (135 of them) were then used to put the letters back on.

The post was repainted in black Hammerite .  Bob and I put the post back together on Thursday 29th September.  The fingers have new stainless steel bolts, washers and nuts and the bolts securing the bracket collars have been replaced.  Plenty of grease has been used in the reassembly for future protection.  The Village Hall sign was remounted on the post.